With polls showing the presidential race neck and neck, Americans are coming up with some creative ways to predict our next president—from a psychic pet squirrel, to the number of Obama and Romney masks sold for Halloween, even to the outcome of an Ohio Buckeye or Florida Gators football game.

However, math remains the most reliable way to predict the president. Although polling is not an exact science, CSU Fullerton civil engineering professor Chandra Putcha is using math and science to take it to another level of accuracy.

Putcha created a comprehensive way to make predicting less guessing and a more scientific process. He forecasted the outcome of the Nov. 6 presidential election using his own integrated approach that includes both state polls and probability calculations based on historical information.

The winner according to Putcha’s model? Barack Obama—by a popular vote of 51.81 percent vs. 48.19 percent for Republican challenger Mitt Romney. It also places Obama’s Electoral College total at 286 and Romney’s at 252, with 270 needed to win. 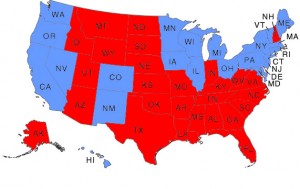 Putcha's predictions on what states will go for Barack Obama (blue) and Mitt Romney (red).

Putcha used a similar model based on probability to correctly predict the outcome in the 2008 presidential election.

In order to create the probabilities that each state’s votes would go to a certain candidate, Putcha took historical polling data from that state to come up with a mean value and standard deviation. When that probability is added to several current national and state polls, it creates a bigger picture of what the outcome should look like come Tuesday night.

But why would an engineer whose teaching and research focus on building bridges and other structures tackle trying to make a presidential election prediction? Putcha says there’s a lot in common—math.

“My research areas of interest are reliability, risk analysis and optimization. These principles can be applied to any discipline—engineering and non-engineering,” said Putcha, who’s taught at CSUF for 31 years.

In fact, Putcha’s work has resulted in more than 135 research papers in this area and he has applied these principles to other disciplines, including political science, sociology, medicine and kinesiology.

As for the psychic squirrels, football games and Halloween masks?

Putcha says that aside from their entertainment value, those predictions are essentially meaningless.

“If it can’t be connected to the election, then it will not decide it,” Putcha said, adding that subjective information including voters’ changing attitudes about issues are already reflected in the polling data.

“It’s about the math. This is what the numbers are saying,” he said.

With the national results in, Obama’s re-election once again validated Putcha’s mathematical model.

The results again show how mathematics can be applied to real life problems, Putcha says.

“In probability models, you are never 100 percent right,” Putcha said. “However, this is about as close as it gets. Overall, the mathematical model is correct.”